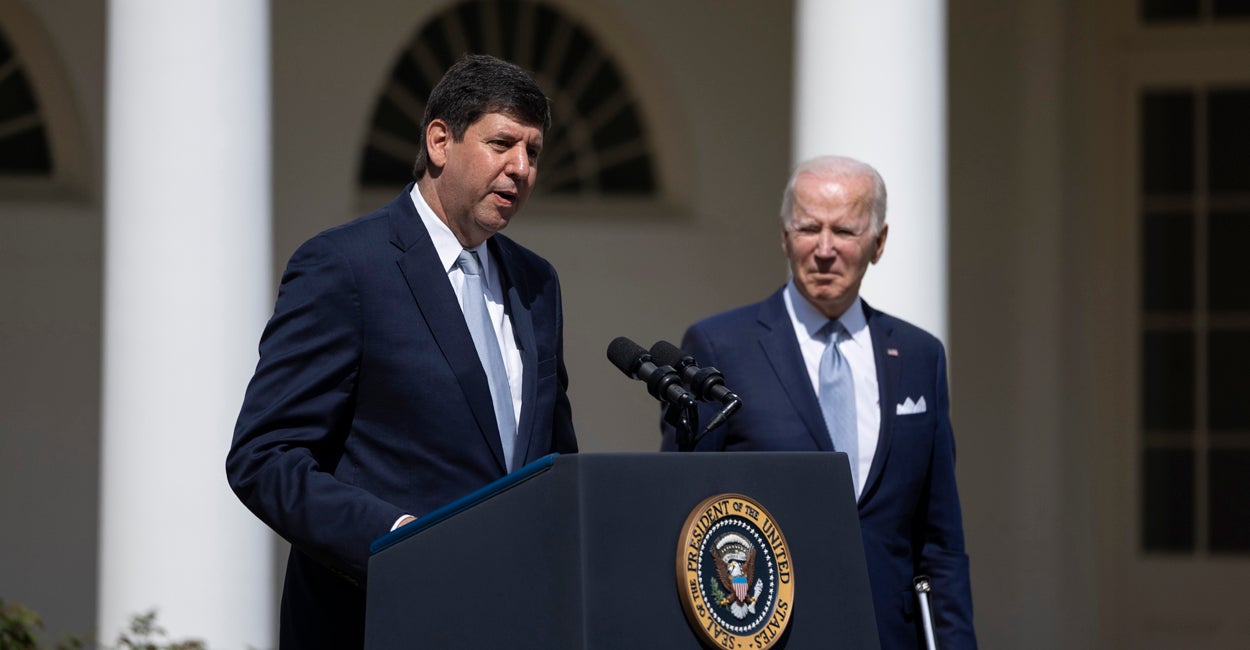 President Joe Biden on Monday nominated Steve Dettelbach, a former U.S. attorney in Ohio with a record of supporting gun control measures, to be director of the Bureau of Alcohol, Tobacco, Firearms and Explosives.

Dettelbach has a history of backing gun control measures, promoting several firearms restrictions during an unsuccessful 2018 campaign to become Ohio’s attorney general, and making multiple posts on social media calling on America to take action in the wake of high-profile shootings. He told WOSU that he supported universal background checks and bans on so-called assault weapons during his campaign.

Dettelbach also opposed a plan to arm teachers in the aftermath of the February 2018 shooting at a high school in Parkland, Florida, telling WOSU “it doesn’t protect people in any meaningful way, it’s more than a day late and much more than a dollar short.”

“Who allows madmen such easy access to firearms?” Dettelbach asked in a 2019 Twitter post shortly after a shooting in El Paso, Texas. “Who armed a madmen with enough hate that he would kill people just because they were Hispanic? Those people must also be held accountable.”

Read this statement from the El Paso Sherriff. He is rightfully enraged. Who allows madmen such easy access to firearms? Who armed a madmen with enough hate that he would kill people just because they were Hispanic? Those people must also be held accountable. pic.twitter.com/HQhy8oFtNr

Dettelbach retweeted a 2020 post from the Sandy Hook Promise, a group that advocates for certain gun control measures, asking people to sign a “petition demanding action to prevent school shootings.”

The White House called Dettelbach “a highly respected former U.S. Attorney and career prosecutor who spent over two decades as a prosecutor at the U.S. Department of Justice” in a release Monday.

The nomination of Dettelbach comes in conjunction with a crackdown on so-called ghost guns, according to the release. The Justice Department announced new rules to target ghost guns, including requiring those who make or sell them to get federal firearms licenses and to run background checks.

Biden withdrew the nomination of David Chipman to the ATF in September 2021 after allegations of racist comments and bipartisan pushback over his attitude toward gun owners. Chipman called for banning the AR-15, a popular semi-automatic rifle, and pushed a definition of “assault weapons” that many viewed as more extreme than that of the European Union.

The new nominee, Steven Dettelbach, is a dedicated gun controller who has supported gun bans, restrictions on lawful firearm transfers, and expansion of prohibitions on who can possess firearms. Dettelbach’s history proves he cannot be trusted to work objectively and fairly with law-abiding gun owners, the firearms industry, or law enforcement—he will serve only to further restrict Americans’ rights.

In a statement Monday, the National Shooting Sports Foundation, one of the gun industry’s largest trade organizations, said it had “significant concerns regarding Dettelbach’s previous public statements supporting bans on Modern Sporting Rifles (MSRs), or AR-15 semiautomatic rifles, universal background checks, which are unworkable without a national firearm registry that is already forbidden by federal law, and extreme-risk protection orders, or so-called ‘red flag’ laws, without protections for Due Process considerations.”

Dettelbach did not respond to a request for comment from the Daily Caller News Foundation.

Content created by The Daily Caller News Foundation is available without charge to any eligible news publisher that can provide a large audience. For licensing opportunities for this original content, email licensing@dailycallernewsfoundation.org.

Have an opinion about this article? To sound off, please email letters@DailySignal.com and we’ll consider publishing your edited remarks in our regular “We Hear You” feature. Remember to include the url or headline of the article plus your name and town and/or state.

Washington Post’s Past Racism Detailed in Book on End of...

‘Too Little, Too Late’: Gov. Kim Reynolds Responds to Biden’s...

Why Is It Taking So Long To Get Your Business Going?

Starting a business can be an exciting time in your life. You can be filled with...

The European Council said on April 4 the EU condemns in the strongest possible terms...

We’re not saying we called it, but just a few months back the R29 Shopping team...

Looking after your health this summer

Summertime is a source of great joy for thousands of people. The days are longer,...

The Best Sweater Dresses, According To Obsessed Shoppers

If there's one thing we know about you, dear Refinery29 reader, is that you absolutely...

Interview: Uzbekistan an active player in the global trade...

New Europe in an exclusive interview during the first Tashkent International Investment...

The rise of Micro-influencers as a marketing force

The marketing culture of using celebrities as influencers with covert or explicit...

38 Matching Sweatsuits Worth Living In This Winter

While many of 2019's most-popular fashion trends didn't feel quite right for the...

Fit Foodie Cooking Club: April 2022 This month we are making one of Fit Foodie Finds...